I just received a question about the Burton Silverman slide presentation at the Portrait Society of America conference I recently attended. Linda H has asked what else he had to say about the use of cameras.

In general Mr. Silverman was showing slides of artwork and the photo references used in the creation of art. It illustrates to artists that photo references are a good source of information, but one must be careful not to be led wrong by photos, since they distort what the eye is actually seeing sometimes. He also made comment on the David Hockney theory that lenses have been used throughtout art history to make art, ie. Vermeer projecting his images onto the canvas or Inges using camera obscura to do his wonderful drawings. In essence Hockney used this theory
to ok and justify projecting images onto canvas rather than taking the time to learn to actually draw. I wholeheartedly agree with Mr. Silverman's view that this is rubbish. Why bother to create art if you aren't going to learn to draw. You could just as easily buy a coloring book and some crayola crayons.

We also saw numerous examples of artists creating works which were so wonderfully executed that one would think they were photography and yet they were not in any way created with lenses.
Posted by Linda Lawler at 11:28 AM 1 comment:

If you have not yet noticed, I am a total clutz with computers. I posted a short note and a picture of a small study of my cat Picasso several days ago, before the Portrait Society Conference, or so I thought. Turns out it was in my drafts section still. So, I have just posted it for real and it is sandwiched in between other previous posts. Go back to around April 14 or 16 to see this one.

I am not alone when it comes to being a clutz with technology. I thoroughly enjoyed a segment of the Portrait Society on Sunday morning, when Burton Silverman spoke and had some comical difficulties with the computerized projection equipment. Could this be an indication of my own genius laying dormant? Anyway, Mr. Silverman gave a very enlightening talk on the use of cameras and their impact or influence on portraiture. Thank you Mr. Silverman!
Posted by Linda Lawler at 4:10 AM 1 comment: 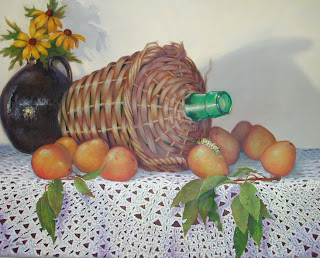 I finally completed the third in my vanitas series.

My intent is to pay homage to the dutch masters and do so in my own way by adding my own twist. Instead of dark and brooding backgrounds, my series will be lighter and higher key.

I am pretty happy with this but thought the crochet table scarf would never be finished. When it was finished, I sat it aside and viewed it a few days, finally deciding that I needed to show one more sign of new life.....the catepilar. The symbolism for death is not strong enough in these first three paintings and I intend to strengthen that aspect in coming paintings.
Posted by Linda Lawler at 4:15 AM No comments:

I am taking a few days off next week and attending the Portrait Society of America annual conference in Reston Virginia. I will come away with much new knowledge and be so energized. I find it amazing that a short conference like this can inspire me for months. I promise to take lots of notes and give you some great information over the coming weeks.


Posted by Linda Lawler at 3:05 PM No comments: 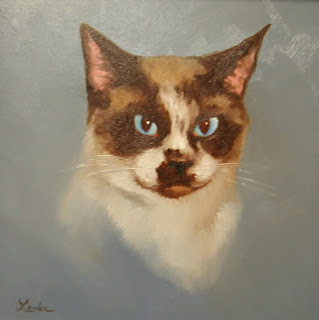 I never tire of painting Picasso and so I spent some time yesterday doing this little study of him. It measures 8" x 8" and is oil on gesso board.

I really need to improve my photography abilities.
Posted by Linda Lawler at 2:56 PM 1 comment:

Due to be held October 2 through October 26th at the Ice House Gallery. All details are on the website and prospectus.
Posted by Linda Lawler at 2:51 PM No comments:

Yesterday I celebrated my 57th birthday. More wrinkles to show for my life experiences, were duly noted that morning.

I worked at the studio all day, which is what I love to do more than anything else. I came home to a sumptuous dinner and a brand new state of the art Margarita Machine from Williams/Sanoma. Also a card which said "All Things In Moderation" Not to worry, I am a very moderate individual.
Posted by Linda Lawler at 9:12 AM 1 comment:

Next week I will spend Thursday, Friday, Saturday and Sunday at the Portrait Society of America Annual Conference in Reston Virginia. I am really looking forward to this event and am fortunate to live close enough to drive each day and not have to have hotel accomodations. I will have a friend sit my gallery while I am away.

At the conference, I will renew some friendships, make a few new ones, and get totally re-engergized and motivated about my portrait work. It is an excellent conference to attend and so informative. I am registered to take the Drawing workshop with Edward Jonas and Anthony Ryder. Both are tops in the field of portraiture and both are fantastic teachers. This workshop will be the highlight of the conference for me.
Posted by Linda Lawler at 9:03 AM No comments:

I spent today at The Art League in Alexandria, helping with receiving for the monthly juried show. While there, I went upstairs to the offices to do some copier work for the gallery and happened to see a beautiful study by Kurt Schwartz in the conference room.

The study was of a black German Shepard dog and it was stunning. You can see life in the dog's eyes and I was mesmerized by the fluid beauty in his brushstrokes. This one painting convinced me today, that I will enroll in one of his classes very soon.
Posted by Linda Lawler at 5:31 PM 1 comment: